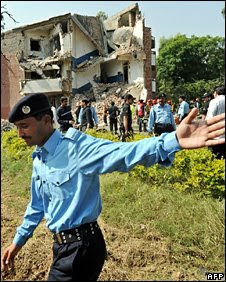 At least eight people have been wounded in a suicide bomb attack inside the main police complex in Pakistan's capital, Islamabad, police have said.

Police said the attacker managed to drive into the Police Lines compound before blowing himself up inside an office of the anti-terrorist squad.

Police media spokesman confirmed that a female suicide cadre had jumped at the convoy of Minister Maithripala Sirisena when he was returning from Bandaragama. The minister’s vehicle was not damaged. Two vehicles of his convoy sustained damages. Six persons were injured from the blast.
Posted by SRI LANKA TODAY at Thursday, October 09, 2008

An LTTE suicide cadre blew up himself targeting the vehicle convoy of Minister Maithripala Sirisena at Privena Junction , Boralasgamuwa at 1.15pm.Police confirmed that the minister is unharmed.
That place about 15 Km far from Colombo city.
Posted by SRI LANKA TODAY at Thursday, October 09, 2008