JVP to go to courts against dissolve two provincial councils

The JVP is to go to the Supreme Court against the government’s decision to dissolve the North Central and Sabaragamuwa Provincial councils and against the negligence of police regarding the Arrachchikattuwa attack on participants of two protests organized by the party. 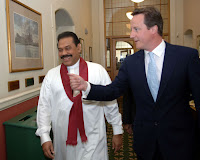 
Britiain's Opposition Leader, David Cameron, said that his country appreciates the challenges Sri Lanka is facing and the efforts being made as a democracy confronted with terrorism and is keen to understand the related problems and look at how to best assist. Mr. Cameron expressed these views when he met President Mahinda Rajapaksa in London, where the latter is attending a mini summit of Commonwealth Heads of State to discuss among other matters the reform of multilateral institutions such as the World Bank and International Monetary Fund.

President Rajapaksa explained to Mr. Cameron the efforts his government had made to restore democracy in the Eastern province and to launch an ambitious development programme that would help empower the people of all communities who had been affected by the conflict.

The President highlighted that the new Chief Minister of the Eastern province, Mr. Sivanesathurai Chandrakanthan, was previously a frontline member of the LTTE who had renounced terrorism and entered the democratic process along with his cadres. He stated that the victory of Mr. Chandrakanthan's party was a clear indication that the people of the Eastern province had endorsed the transition to democratic governance as a result of the development work the government had undertaken during the past year which had been appreciated by the Tamil community.
Posted by SRI LANKA TODAY at Tuesday, June 10, 2008


The Government dissolved the North Central and Sabaragamuwa Provincial Councils with effect from midnight yesterday through two special gazette notifications issued by the Governors of the two provinces.

The dates for the elections in the two provinces will be announced shortly by the Elections Commissioner who will also announce the dates for calling nominations for these two Provincial Councils.

According to the former North Central Province Chief Minister Berty Premalal Dissanayake difficulties had been encountered in performing administrative functions of the two Provincial Councils due to obstructions by the UNP and JVP.

"We had to face various difficulties to implement development projects in these two provinces as the UNP and JVP when combined had majority power in the two councils. When we try to pass some resolutions, various allegations and interruptions are made by these two parties. Therefore we agreed to the dissolution of the two Provincial Councils," he said.
Posted by SRI LANKA TODAY at Tuesday, June 10, 2008


President Mahinda Rajapaksa met Deputy Malaysian Prime Minister and Defence Minister Dato Najib Tun Razak on the sidelines of the Commonwealth Summit for the Re-structure and Reformation of International and UN institutions, in London yesterday.

The talks between President Rajapaksa and the Deputy Premier had been cordial and centred on bilateral relations between the two countries. 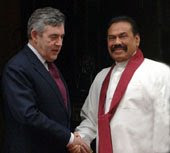 The meeting of the Commonwealth heads of States on “Reform on International Institutions” was held at the Cabinet room at 10 Downing Street.