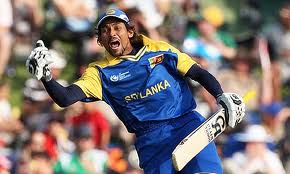 The Selection Committee headed by Duleep Mendis has named T.M. Dilshan as the Captain of the Sri Lanka cricket team pending the approval of the Sports Minister, Mendis told Ada Derana a short while ago. Secretary SLC Nishantha Ranathunga speaking to Ada Derana stated that Dilshan has been appointed captain for the upcoming English tour.
Posted by SRI LANKA TODAY at Tuesday, April 19, 2011

Eastern university will be reopened

The government's debt office said the 6-month yield rose 02 basis points to 7.11 percent and the 12-month yield rose 03 basis points to 7.33 percent. The debt office, which is a unit of the Central Bank said only 7.0 billion rupees of bids from real buyers were accepted in a sale where 10 billion rupees of Treasury bills were maturing.
The debt office did not say the balance bills were retired. The terminology is usually indicative that the balance 3.0 billion holders had been repaid with printed money.
More: http://www.lankabusinessonline.com
Posted by SRI LANKA TODAY at Tuesday, April 19, 2011

President Mahinda Rajapakse, who is currently engaged in a three day official tour in Bangladesh, met Prime Minister Sheikh Hashina Wajid last evening.  The Sri Lankan President was warmly received by Mrs. Wajid at the Prime Minister’s office.
Bilateral official talks between Sri Lanka and Bangladesh commenced at this occasion.  Both leaders focussed attention on the religious and cultural relations between the two countries since ancient past.
President Mahinda Rajapakse commended the progress in diplomatic relations between the two countries commenced in the year 1972.  The Sri Lanka and Bangladesh leaders also discussed on the propagation of air travel, exchange of cultural and education programmes.  The President also praised the Bangladeshi government for acting as a friendly neighbour especially during the humanitarian operation to eliminate terrorism and also keeping away from the  process  of  building opinion against Sri Lanka. He further appreciated the assistance extended by Bangladesh in regional security issues.

Both leaders also discussed ways of enhancing economic development between the two countries by developing facilities at the Ports in Bangladesh and Sri Lanka.  They also pointed out on how the two countries should strive to  become middle income countries by the year 2016 and also on bilateral investment securities.
Sri Lanka and Bangladesh entered into four agreements of mutual understanding and also signed an exchange programme agreement.  Minister Professor G.L. Peiris signed on behalf of Sri Lanka to this agreement.  They included agreements on cooperation in the fields of tertiary and vocational education and solidarity in fishing.  In addition two mutual understanding agreements on the agricultural sector and trade promotions were also signed.  The two countries also entered into exchange programme agreement in cultural, educational and scientific sectors.
Bangladeshi foreign minister Dr. Dipu moning called on at the hotel where President Mahinda Rajapakse was staying last evening.  The Bangladeshi foreign minister has conducted talks with the President on

historical relationship as well as on the strengthening of air travel and international relations between the two countries. 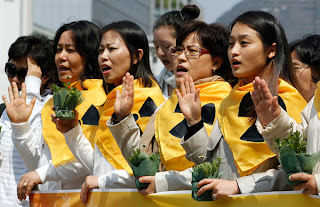 Mothers wearing yellow scarves swear to conserve energy during an anti-nuclear power plant rally in central Seoul April 19, 2011. The mothers gathered to promise to conserve energy at home and to demand a stop to the building of additional nuclear plants in their country after serious radiation leakages at the earthquake and tsunami-damaged Fukushima Daiichi nuclear plant in Japan. REUTERS
Posted by SRI LANKA TODAY at Tuesday, April 19, 2011