Implementation of 13th Amendment is a Guarantee of our National Security 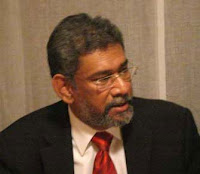 Jayatilleka
There are two types of people who assert that President Mahinda Rajapakse is against the 13th amendment or does not intend to or will not implement it. These are the Tamil ultranationalists, the Tamil hawks and their fellow-traveling Sinhala doves, who say that no devolution will emanate from the Rajapakse administration, and the Sinhala hardliners who oppose any kind of devolution and attempt to use President Rajapakse’s patriotic profile behind which to hide their extremism. Some even invoke Mahinda Chinthana, oblivious to the irony that Mahinda Rajapakse can be safely trusted to know the letter and spirit of Mahinda Chinthana better than anyone else.
Read Full Article:http://transcurrents.com/tc/2009/07/implementation_of_13th_amendme.html
Posted by SRI LANKA TODAY at Saturday, July 04, 2009 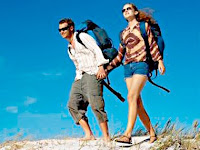 r discourage British holidaymakers from enjoying leopard-spotting at Yala National Park, surfing at Arugam Bay or admiring the Trincomalee harbour, one of the world’s deepest natural ports,” he said.
“This decision was based on our assessment of the improving security situation in these parts of Sri Lanka,”the British High Commissioner said.
In light of the uncertain security situation in areas recently affected by conflict, we continue to discourage British tourists from traveling to other parts of the Eastern Province and continue to advise against all travel to northern Sri Lanka,” he said.
“Now, we encourage Britons planning to travel around Sri Lanka to read our full travel advisories,” he noted.
Posted by SRI LANKA TODAY at Saturday, July 04, 2009


The fourth SAARC Ministerial Conference on Children and the 4th SAAR

C Senior Officials’ Conference on Children will be held on July 9 and 10 at Hilton Hotel, Colombo.
The event is significant for the region and especially for Sri Lanka because it is going to be held after a period of 13 years and Sri Lanka hosts the event after defeating terrorism after 30 years, Child development and Women’s Empowerment Ministry spokesm

an said.
The inauguration of the 4th SAARC Senior Officials’ Conference on Children will be held from 9.30 am to 10.40 am on July 9 at Hilton Hotel, Colombo and the 4th SAARC Ministerial Conference on Children to be inaugurated on July 10 at 9.15 am under the patronage of Sri Lankan Prime Minister Ratnasiri Wickramanayaka.
Posted by SRI LANKA TODAY at Saturday, July 04, 2009

The number of patients who have died due to dengue fever increased to 163 and more than 14,635 have been infected so far, hospital reports said.
Meanwhile, in addition to the dengue prevention programmes that are being implemented, the Ministry of Health is carrying out raids on dengue mosquito breeding grounds. The Ministry has appointed 10 officials to supervise the dengue control program in 10 districts where the identified 68 MOH areas are located. The program will be implemented by the Civil Defence Committees, Grama Niladharis, Samurdhi animators, MOH officers, PHIs and all the other health officers in the relevant area. The dengue control program consists of educational programs, shramadana campaigns, inspections and taking legal action against persons who do not cooperate with the authorities to destroy mosquito breeding sites.(SST)
Posted by SRI LANKA TODAY at Saturday, July 04, 2009

President Mahinda Rajapaksa yesterday observed that a Nation could not be built only with dollars and rupees and the lost freedom could not be reinstated simply through power and political means, bu

d much advanced foresight, to achive these objectives.
Such foresight, as displayed by the Hikkaduwe Sumangala Thera when establishing a Buddhist School like Ananda(1886), instead of sowing anti-imperialism by just shouting slogans in an era repressed by imperialistic ideologies, had stood the nation in good stead in its hour of need, he added.
“In line with its historical beginning Ananda became a shelter for people that were repressed by imperiolistic ideologies and was a role model for many other Schools which followed the same path in the wake of Ananda”
“That School today has breathed life to the Nation than have a trillion slogans,” the President said participating at a felitication ceremony at A

nanda College, Colombo where the historic educational institute paid tribute to its illustrious sons who played a pivotal role in vanquishing the forces of terror.
The President also noted that Ananda over the years had produced men of excellence to the National leadership and although they had excelled in different fields and had chosen different ideologies, they had one common quality, that is the unwavering love for their motherland.
“Therefore the war heroes felicitated by Ananda today, have not only made their Alma Mater proud but also has taught a lesson for all School children in the country on how to be a good leader,” he added
Posted by SRI LANKA TODAY at Saturday, July 04, 2009

e country for Sri Lankan Tamils anymore and that it would be best to press for a fair deal for them within Sri Lanka.He also felt it would be unwise on the part of Tamil Nadu political leaders to make any comments that could inflame passions among the Sinhalese.
Chief Minister Karunanidhi said only by working with the Mahinda Rajapakse government could one hope to ensure proper rehabiliation for the displaced Tamils and also secure Tamils of Lanka justice and adequate say in governance.
Posted by SRI LANKA TODAY at Saturday, July 04, 2009