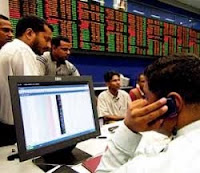 Market Capitalization reached Rs. 1 trillion (1000 billion) today, for the first time in the history of the Colombo Stock Exchange. The benchmark index rose 1.4 percent in the first half hour of trading to a new record high.
Reuters announced yesterday that the Colombo Stock Market (CSE) is the best performing stock market in the world for the year to date. In the flluctuating pattern this morning, Colombo is now the world's second best performing market up 109.88 percent from the beginning of the year, just behind the Lima General Index in Peru, which is up 110.73 percent up so far this year, according to Bloomberg Newswires data.In third place is Russian RTS Index, up 94.21 percent, with Ukraine in fourth place, up 92.46 percent. Bombay's Sensex is up 75.9 percent
Posted by SRI LANKA TODAY at Tuesday, October 06, 2009

Sri Lanka's stock market .CSE, Asia's best performer, hit a record high on Monday on investor hopes for strong post-war economic growth boosted by easing inflation and declining interest rates.
With a return of over 106 percent so far this year, it is the second-best performing bourse in the world after Lima's stock market. Its rise is around double that of the benchmark emerging market equities index .MSCIEF.
The All-Share Price Index of Colombo Stock Exchange jumped 3.22 percent to 3,115.25 points by 0849 GMT, surpassing the previous record of 3,038.48 points traded on Feb. 19, 2007.
It closed 2.66 percent or 80.23 points firmer at 3,098.24.
"This is more than expected," said an analyst on condition of anonymity. "We expect corrections on some of those shares, which have risen with the rally without any reasons. Only clear signs of quarterly earnings could help to maintain the rise" Danushka Samarasinghe, the head of research at Asia Securities, said the surge was due to improving economic numbers:
"The last quarter of this year and the next year are expected to grow much higher due to optimism on Sri Lanka's post-war economy. We expect the index to move further up as the psychological barrier of the previous record is surpassed."
Sri Lanka won a 25-year war against the Tamil Tiger rebels in May and the market has risen over 62 percent since
Sentiment, mainly domestic-driven, has also been boosted by a fall in inflation to a record low of 0.7 percent in September and a decision the same month by the central bank to cut its policy rates by 50 basis points.
Falling interest rates have prompted many investors to switch out of bonds into stocks, analysts said.
"Interest rates sliding down as low as 10 percent helped the market," said Harsha Fernando, CEO at the SC securities in Colombo. "There is a lot of foreign interest seen."
Analysts and traders said though there have been a lot of queries from foreign funds on the bourse, they are yet to see inflows into the market.
As of Monday, net foreign inflows totalled 530.7 million rupees ($4.62 million) this year, a fraction of the 14.1 billion rupees seen in 2008.
The central bank said foreigners have invested $1.5 billion so far this year into government securities as of Friday and analysts said high yields in the past were the reason for high foreign investments in bonds than sheras.
After such a rapid rise, some brokers said the bourse was now overheated. Reuters charts show that the 14-day relative strength index was at 84 on Monday, above the 70 threshhold used to indicate when a market is overbought.
"Some fundamentally unsound shares have also gone up significantly," said Mohandas Thangarajah, a broker at First Guardian Equities.
"Future tourist arrivals, better economic data, foreign inflows into portfolio investments, and further low interest rates will help to mTurnover on Monday hit 1.06 billion rupees ($9.27 million), more than double of 2008 daily average of 464 million rupees.
The central bank cut its key policy rates on Sept. 11 to four-year lows to compel commercial banks to boost private sector lending and spur faltering growth. [ID:nCOL160992]
The rupee LKR= closed flat at 114.80/85 a dollar with the central bank buying dollars at 114.80, dealers said.
The interbank lending rate or call money rate CLIBOR edged down to 9.491 percent from Friday's 9.455 percent.aintain the upward momentum."
More:
http://in.reuters.com/article/domesticNews/idINCOL17522820091005
Posted by SRI LANKA TODAY at Tuesday, October 06, 2009

Condemning the brutal attack on media personnel who went to cover the misuse of state property in constructing a private road in Deniyaya along with a group of UNP parliamentarians, independent election monitoring body CaFFE expressed their displeasure. Campaign for Free and Fair Elections (CaFFE) Media Spokesman Keerthi Tennakoon issuing a statement said that they are highly concerned about the attack on five journalists who went with a group of UNP parliamentarians to cover the progress of a private road allegedly being constructed using state machinery leading to Bevaraliaya Estate in Deniyaya on Sunday. It stated that the public is highly concerned about the activities of political parties especially during an election period and it is not uncommon to see how media is greatly concerned to cover such activities or events in order to report to the public.Obstructing, harassing and assaulting journalists engaged in duty had been utterly condemned by CaFFE requesting competent authorities to ensure the right and safety of journalists to cover the news in an election period.
http://www.caffe. lk
Posted by SRI LANKA TODAY at Tuesday, October 06, 2009