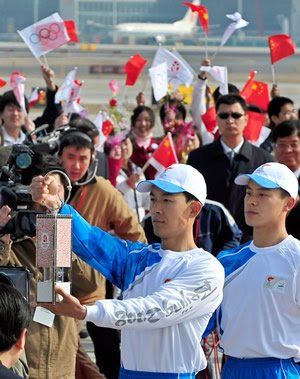 Chinese torchbearers walk with the Olympic flame upon its arrival at Beijing's Capital International Airport on March 31, 2008. The Olympic flame arrived in Beijing on March 31 from Greece ahead of the official start of the relay, with security tight at the Chinese capital's airport amid concerns over protests.
Posted by SRI LANKA TODAY at Monday, March 31, 2008

Preliminary arrangements for the upcoming Eastern Provincial Council elections are under way and accordingly the applications for postal votes are ready in accordance with the voters list of 2006.

The election secretariat says that a large number of security forces personnel are expected to apply for postal votes. The postal votes applications will be issued after the 3rd of April, the final day of nominations.

Meanwhile, several main political parties are in the process of finalizing their nominations for the eastern provincial poll. 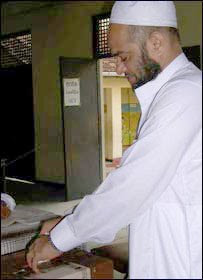 Minister Mahindananda Aluthgamage, a member of the SLFP nomination committee said that the list of nominations has been finalized.
Posted by SRI LANKA TODAY at Monday, March 31, 2008