Nations caught in crossfire of extremism must be helped by international community: President Zardari 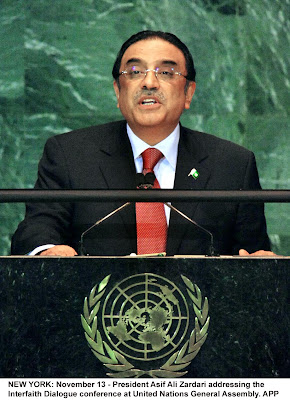 Nations caught in crossfire of extremism must be helped by international community: President Zardari

UNITED NATIONS, Nov 13 (APP): President Asif Ali Zardari says the world community should commit itself to eliminating the root causes of extremism and terrorism, giving all people in all societies renewed faith in their countries, in their laws, and in the futures of their children.He said this while addressing the special session of the United Nations Interfaith Dialogue in New York City on Thursday(13th).

In his speech President Zardari urged participants of the interfaith conference to have consensus on an international agenda which may ensure (i) Hate speech aimed at inciting people against any religion must be unacceptable; (ii) Injustice and discrimination on the mere basis of one’s faith must be discouraged ‑‑‑ not only in words but through meaningful actions; (iii) Bigotry manifested in Islamophobia and anti‑Semitism must be combated; (iv) Dialogue, and not discord, between civilizations and faiths must be encouraged;

(v) Nations with little resources caught in the crossfire of extremism should be helped, strengthened and aided by the international community.
Read More: www.newsonline24pakistan.wordpress.com
Posted by SRI LANKA TODAY at Friday, November 14, 2008

President Mahinda Rajapaksa has gone for the BIMSTEC summit with the sole intention of carrying forward a secret agreement with the Indian Government, said JVP Leader Somawansa Amarasingha, while celebrating the JVP’s annual ‘Il Mahaviru Samaruma’ held at the Viharamahadevi Park yesterday.

“Mahinda had sent his brother earlier; but now he has gone himself, to make a pledge to the Indian Government” he said.
Posted by SRI LANKA TODAY at Friday, November 14, 2008

Visiting Sri Lankan President Mahinda Rajapaksa said yesterday that there was no question of ordering a cease-fire against the LTTE, and added that his government would take all necessary steps to protect the Tamils in Sri Lanka.

"The Tamilians are our people; we have been taking care of them and we will continu

o came up for discu

Mr. Rajapaksa told reporters in Delhi: "For the last twenty years, we have been witnessing this ceasefire. We will not allow terrorism to continue."

Prime Minister Dr. Manmohan Singh on the sidelines of the Second BIMSTEC summit being held in New Delhi

. The issue of attacks on Indian fisherman als