While warning that the victory in the provincial council election would lead to a government dictatorship, SLFP (M) Convenor Mangala Samaraweera called for the setting up of a joint opposition alliance a short while ago. He also added that he would initiate an alternative defence information centre to educate the masses on the real situation of the war.
Posted by SRI LANKA TODAY at Thursday, August 28, 2008

After election CAFFE spokesman punished by his campus 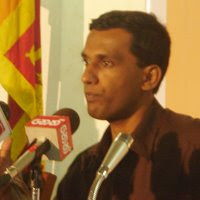 After election CaFFE spokesman punished by his campus

The University of Kelaniya has given a punishment transfer to its employee Rajitha Keerthi Tennakoon, who is also spokesman for local election monitor Campaign for Free and Fair Elections (CaFFE).

Secretary of CaFFE Senaka Wattegedara has informed the Free Media Movement that in addition to Mr. Tennakoon's transfer from the Faculty of Social Sciences, he is to face a disciplinary inquiry.

Five Media, including the FMM, said in a statement that this constituted an infringement of fundamental and freedom of expression rights.

Mr. Tennekoon acted as CaFFE spokesman during the recent polls for the North Central and Sabaragamuwa Provinces.

Quoting from the establishment code of universities, the statement said campus staff has the right to express their political viewpoints.