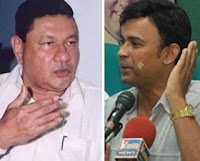 of the party's Working Committee.

This is in recognition of their contributions and skills shown at the polls for the North Central and Sabaragamuwa Provincial Councils two days ago.
Posted by SRI LANKA TODAY at Monday, August 25, 2008 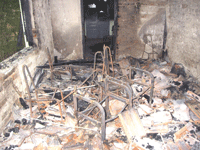 UNP MP Palitha Ranga Bandara's office in Anamaduwa was burnt by an unknown gang last night. Police said that the office had been totally destroyed and the damage estimated to be over Rs. 1 million.
Posted by SRI LANKA TODAY at Monday, August 25, 2008

Elections free and fair: Monitors
The main Election Monitors, People’s Action for Free and Fair Election (PAFFREL) and Campaign for Free and Fair Election (CAFFE) yesterday said the elections held in the North Central and Sabaragamuwa provinces were generally peaceful and the few incidents did not have an impact on the final result.
Posted by SRI LANKA TODAY at Monday, August 25, 2008

Mandate for troops, not for Cabinet or corruption

Mandate for troops, not for Cabinet or corruption

The mandate received by UPFA at PC polls is one given to the troops and not for the jumbo Cabinet or corruption, National freedom Front leader Wimal Weerawansa said while ago addressing a press conference in Colombo.
Posted by SRI LANKA TODAY at Monday, August 25, 2008

The governing United People’s Freedom Alliance (UPFA) emerged victorious at Saturday’s North Central and Sabaragamuwa provincial council elections and President Mahinda Rajapaksa termed it as a “victory for the motherland.”

The JVP was only able to obtain 26,738 votes in the North Central Province obtaining one seat and 19,068 votes in Sabaragamuwa winning two seats.

“I see the convincing victory by the United People’s Freedom Alliance (UPFA) at the elections to the North Central and Sabaragamuwa Provincial Councils held yesterday as a victory for all our people who love our motherland.

“It is an election where the country has won. While thanking the people of Anuradhapura, Polonnaruwa, Ratnapura, and Kegalle Districts and all others, who contributed to this victory, I call upon them to enjoy their success in peace,” an elated Presdient Rajapaksa said.

“I express my humble gratitude for the new people’s mandate given to the “Mahinda Chinthana” through the free and fair election held yesterday.

“There is no doubt that public opinion represented in the North Central and Sabaragamuwa Provinces is the opinion of the entire country. While the majority of our people have been able to defeat the many vicious efforts of forces that were ranged against the country, the strength and morale that our heroic troops will receive from this victory in their battles to finally end the bloody terrorism from our country is immeasurable.

“My government and I give foremost place to the country, and its people. This public mandate has given greater strength and courage to expedite and energise our march to protect the country and awaken the people.

“I repeat the plea I made to you in the Presidential Election of 2005 to help build a country that is free of the differences of political party, colour and all such differences.

I wish to state that the door remains open for those who have delayed to join us on that march,” the President added.