Tha latest target hunt down of Sri lanka Rupavahini (television) Corporation stafer is Arunasiri Hettige the chairman of the trade Union.
When Mr. Hettige was waiting at Kotokawaththa junction to go for duty around 7.30 AM today (14), a group of thugs attacked him with a sharp knife injuring his head. He was immediately admitted to Colombo General Hospital with severe bleeding from his head. Media organizations joined with the main opposition launched a massive demonstration before the SLRC on March 11 against hunting SLRC staff. On that day, they declared that the SLRC would strike work continuously if another worker is attacked.
Employees of the Rupavahini Corporation have stopped all live programmes with immediate effect till President Mahinda Rajapaksa intervenes and gives an assurance that spree of violence against Rupavhini employees would be brought to an end. However The President Mahinda Rajapaksha attended this matter. Then live programes goin on.

Media organizations are protest for this matter.
Posted by SRI LANKA TODAY at Friday, March 14, 2008

Eastern Provice polls on May 10 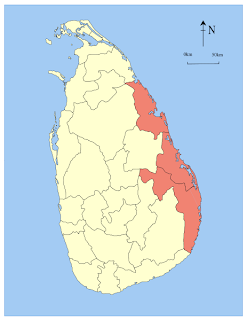 The government will hold the provincial council elections in the Eastern Province on May 10; nominations will be called from March 27 to April 3, an official of the Elections Department said yesterday.

The elections will be conducted to establish the provincial administration in the East -- for the first time since it was de-merged from the North following a Supreme Court ruling.

Meanwhile, Local Government and Provincial Councils Minister Janaka Bandara Tennakoon said that his Ministry had already given instructions to the Department to take action in this regard.

With the PC elections coming hot on the heels of the local government elections in Batticaloa, political parties are now bracing up to contest the upcoming PC elections. The JVP has also decided to join in the fray this time.

JVP parliamentary group leader Wimal Weerawansa told that his party would contest the elections in the three districts in the East, but that a final decision had to be taken in consultation with the party hierarchy.

“Most likely we will contest in all three districts,” he said.

The SLMC, meanwhile, said that it remained open for discussions with breakaway Muslim parties to come to an understanding on fielding common candidates for the election.

The party’s general secretary, Hasan Ali, said that the Eastern Province was their stronghold, with a sizeable concentration of Muslims and, therefore, they should not allow the Muslim vote bank to be divided among several parties.

“So we are willing to discuss with the Muslim political parties led by Ministers Amir Ali and M.L.M. Athaulla. If we all reach common ground on the elections, it will increase our chances of winning the council,” he said.

He said that the SLMC would hold a consultation meeting with its organizers at the grassroots level and the Pradhesiya Sabha members to plan out logistics for the election.

The new political alliance comprising the EPRLF (Vartharajah) faction, the TULF led by V. Anandasangari and PLOTE led by D. Sitharthan, has also decided to contest the elections.

EPRLF leader P. Sridharan said that his party was happy about the local government elections in Batticaloa, stating it was conducted in a peaceful manner, unlike the 2004 General Elections in the North-East.

“During that period, the LTTE helped the TNA to increase their votes. No such thing happened this time,” he said.

The main Opposition UNP said that it would decide on the elections soon. UNP National Organizer S.B.Dissanayake said that they urged the government to disarm the paramilitary forces operating in the area and ensure a favourable atmosphere for the elections.

“We were ready to contest the local government elections as well. But some paramilitary groups threatened our prospective candidates. So we gave it up. Anyway we are now doing the groundwork for the upcoming elections. A final decision will be taken very soon,” he said.