President Asif Ali Zardari called the Indian Prime Minister Manmohan Singh on telephone Friday and condemned the Mumbai terrorist attacks. Talking to the Indian Prime Minister President Asif Ali Zardari said that he was appalled and shocked over the tragedy, which he said had opened up his own wounds as Shaheed Mohtarma Bhutto had also fallen prey to the militants and terrorists.

He said that non state actors wanted to force upon the governments their own agenda but they must not be allowed to succeed.

The President said, “We should not fall into the trap of the militants.”

The President said the government will cooperate with India in exposing and apprehending the culprits and the master minds behind the attacks.

President Asif Ali Zardari also conveyed to the Indian Prime Minister his heartfelt condolences and of the people of Pakistan over the loss of innocent lives in the attacks and urged him to convey his feelings to the members of the bereaved families.

President Asif Ali Zardari rejecting the claims of Pakistan’s involvement in Mumbai terrorist attacks, said Friday Pakistan could neither gain anything not the democratic government believed in such tactics.“Currently, India was also facing security challenges on domestic front”, the President said while talking to German Ambassador Dr. Michael Koch, who called on him here.

President Zardari condemned the incident and informed the Germany envoy that he had spoken to Mrs. Sonia Gandhi and Dr. Manmohan Singh over telephone to offer Pakistan’s assistance in the investigations, according to a foreign office statement issue here.

The German Ambassador appreciated Pakistan’s efforts and sincerity towards normalizing relations with India and in this regard referred to the President’s courageous interview to the Indian media as well as the mature and constructive statement of Foreign Minister Shah Mahmood Qureshi, who is in India, in the wake of Mumbai terrorist incidents.

The President informed about Pakistan’s efforts towards building bridges with Afghanistan and in this regard highlighted his upcoming visit to Afghanistan and visit to Turkey to attend the trilateral Summit.

The President and the German envoy exchanged views on the state of bilateral relations, terrorism and extremism in the region and Pakistan‑India relations.

In the context of terrorism, the President reminded that the roots of the current situation lay in the efforts of some countries to militarily defeat the Soviet forces in Afghanistan without an exit strategy.

He emphatically mentioned that the germs of terrorist elements were not produced in security agencies’ labs in Pakistan but they were created overseas and transferred to this region.

The President expressed profound gratitude for Germany’s support at the Friends of Democratic Pakistan Forum, IMF’s financial plan for Pakistan and the understanding that German Government has displayed towards Pakistan’s difficulties.

He mentioned that opting for the IMF package was an extremely difficult decision for the government under the prevailing circumstances. The people of Pakistan have high hopes with the democratic government and needed something tangible for themselves, he added.

The President said that he though inherited the economic problems but these were now his problems and he was fully resolved to solve them.

He mentioned that unlike other parties the Pakistan People’s Party was the voice of the voiceless people, which constituted 86% of Pakistan’s population.

People are in dire need of instant gratification from democracy which he realizes and was fully committed to bring prosperity to the people. His initiative of Friends of Democratic Pakistan Forum (FDPF) is a manifestation of his efforts to that end.

“In his concept, FDPF is to become a more encompassing forum”, the President said and added it is his intension to get India and some other regional countries also on board in the larger interest of security, stability and prosperity of the region.

The President also informed about his plan of national reconciliation, which included his interactions with the people of FATA and Balochistan. He was confident to achieve this objective.

Pakistan has nothing to hide, says Pakistan PM Gilani

The Prime Minister expressed sympathy on behalf of the people and government of Pakistan with Indian Prime Minister, Congress leader Ms. Sonia Gandhi, people of India and the families of those who lost their near and dear ones in “the unfortunate incidents of barbarism.”

Gilani termed the incident “inhuman and condemnable from all aspects.”

He said Pakistan too was a victim of terrorism and appreciated the fact that Indian Prime Minister was the first one to telephone him after the Marriott hotel blast.

“Dr. Singh told the Prime Minister that preliminary reports point towards Karachi and stressed the need for increased intelligence sharing and cooperation in order to evolve a joint strategy against terrorism and extremism,” a press release from the PM House said.

Dr. Singh requested the Prime Minster to send DG ISI to India for exchange of information in this regard.

The Prime Minister accepted the request and said that after working out modalities by both the governments, the ISI chief will visit India at the earliest, the press release said.

The Prime Minister also extended his government’s full support for jointly combating extremism and terrorism and also offered help in investigating the incident.

Inter-Services Intelligence chief coming to India at the earliest

Inter-Services Intelligence chief coming to India at the earliest

In a move that unambiguously signalled its eagerness to defuse the tensions with India over the Mumbai terror attacks, Pakistan on Friday took the extraordinary decision to send the head of its Inter-Services Intelligence to New Delhi at the earliest for “an exchange of information” about the attacks.

The Director-General of the ISI is a serving Lieutenant-General in the Pakistan Army. The office is presently held by Ahmed Shuja Pasha.

He took charge of the ISI last month after a reshuffle in the top echelons of the Army. His visit would be the first by the head of Pakistan’s top intelligence agency to what it has historically projected as dushman humsaaya, Urdu for “enemy neighbour.”

Endgame in Mumbai, death toll could be 200 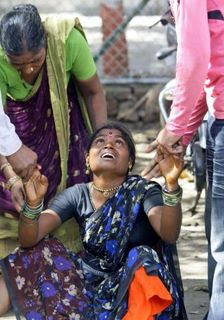 Endgame in Mumbai, death toll could be 200


Even as the special forces and the police succeeded in freeing 200 people who were holed up inside the Oberoi and Trident Hotels for the third day, four Israeli and United States nationals held hostage in a south Mumbai Jewish religious centre were found dead when commandos stormed the building late on Friday evening.
Posted by SRI LANKA TODAY at Saturday, November 29, 2008 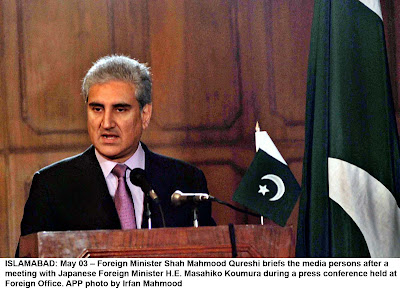 cooperation to India at all levels including sharing of information between intelligence agencies of both the countries to counter menace of terrorism.

He said it is a difficult moment for India but there is a need to avoid blame game of the past. “We should demonstrate statesmanship to wriggle out of this situation,” he added.

Expressing sympathies on behalf of the people and Government of Pakistan to Indian side, he said Pakistan wanted to strengthen institutional arrangement of anti‑terrorism mechanism by sharing the information.

Pakistan was ready to cooperate with India

It had also offered establishing hotlines between Chiefs of Intelligence Agencies and National Security Advisers as terrorism was not a Pakistan’s problem only. “It is regional and global curse,” he added.

Foreign Minister said : “In this situation, I understand compulsions of the Indian government including holding elections and others but at this stage we should not give value judgment or jump to the conclusions,”.

“We should not give knee jerk reactions,” he said adding in the past insinuations on Samjhauta Express blasts were also witnessed. Later, an Indian army serving officer Lt. Col. Shrikant Purohit was named as one of the accused in the Samjhauta blasts case.

He said cities of Pakistan also witnessed to such barbaric acts and Pakistan was dealing them on daily basis.

Negative elements were present in both the countries, he said adding there were incidents of terrorism in Pakistan, but Islamabad did not involve in blame game.

He said present elected government had adopted a zero‑tolerance policy towards these elements and Pakistan’s security forces were engaged in eliminating them.

To a question on Indian Prime Minister’s request to send ISI Chief to India to share information on Mumbai blasts, he said Pakistan was ready to cooperate with India in this regard.

He said he would discuss with President Asif Zardari about this matter and whatever was required, would be considered.He said India could trust Pakistan and Islamabad was keen to move forward sincerely in sharing information on this account.
Posted by SRI LANKA TODAY at Saturday, November 29, 2008