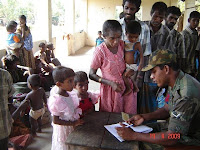 According to defence sources, the two LTTE leaders along with their family members arrived at the army defence line at Puthumatha (Picture left-Daya master) 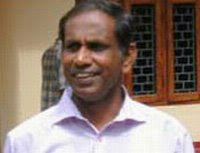 lan area this morning (Apr 22) and surrendered themselves to the Army officials.

Daya Master, a former private English tutor later joined the terrorists outfit is known to be one of the most senior member of the LTTE. He was the head of the LTTE media and propaganda machinery for years until he was sacked from his position.

George, a former postmaster in the government postal department is also known to be one of the most senior LTTE cadre. He is also a language translator of the outfit and once performed as the English translator to Thamiselvam, former LTTE "political head".

d to deliver a baby to a pregnant mother, Mrs.

Vashikaran Vandanadevi (32) in Puthukudirippu area while she was being taken to an IDP center on a bus last evening. Pics Courtesy Army
Posted by SRI LANKA TODAY at Wednesday, April 22, 2009