A crowd beside a portrait of Sri Lanka's president celebrate the country's military victory on May 18.

"We are celebrating the defeat of terrorism," he said in a nationally televised speech before parliament. "We have won and restored democracy in the country."
Rajapaksa announced that Wednesday would be a national holiday, to celebrate the war's end and begin a new phase in the country's history.
It is time for Sri Lanka to build "a new country ... a new nation," he said, calling "the defeat of Tamil terrorism ... a victory for the Tamil people."
"What have they given the Tamil people?" Rajapaksa asked, suggesting that the war had cost them far more than they had gained. With the war over, he said, Sri Lanka would begin to restore government services to Tamil areas.
The United Nations, meanwhile, urged the government to provide more for the 65,000 people who had fled the last fighting in the past few days. It said there were now 265,000 displaced people in the country.
A short time after the presidential address, the military announced that it had recovered the body of Tamil Tiger founder and leader Velupillai Prabhakaran. A local television station aired video it said showed his body.
The "psychopathic leader of the world's most barbaric terrorist outfit ... has been found," confirmed Gen. Sarath Fonseka, commander of the Sri Lankan army, according to the Ministry of Defense Web site. "Troops ... have found the bullet ridden body of the terrorist leader lying on the bank of the Nanthikadal lagoon," the ministry reported.
But earlier in the day, the pro-rebel Web site Tamilnet.com reported that the Tigers' leader was "alive and safe," countering previous military claims.
Posted by SRI LANKA TODAY at Tuesday, May 19, 2009

The President Mahinda Rajapakse has announced that tomorrow (Wednesday May 20th) will be a national holiday in commemoration of the defeat of terrorism in the country. The announced holiday will be for all Public, Bank and Mercantile sectors.
Posted by SRI LANKA TODAY at Tuesday, May 19, 2009

LTTE defeated; Sri Lanka liberated from terror
Sri Lankan armed force have militarily defeated the LTTE and freed the nation from three decades of terror, Army Chief Lieutenant General Sarath Fonseka announced.
Meanwhile, defence sources on the battlefront said all top LTTE leaders were believed to be killed during their abortive attempt to flee from advancing troops this morning (May 18). According to the sources, troops have found a burnt body suspected to be of LTTE chief V. Prabhakaran. However, the sources said that positive identification is yet to be made.
Also, unconfirmed sources revealed that LTTE’s intelligence wing leader Pottu Amman and Sea Tiger wing leader Soosai were killed in today’s battle.
Posted by SRI LANKA TODAY at Tuesday, May 19, 2009 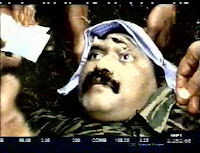 Eelam (LTTE) has been found short while ago (May 19). According to the defence sources, the LTTE leader who has ordered thousands of Tamil youth to give up their lives for him has tried to save his life until the last moment.
The 4th Vijayabahu Regiment(4 VIR) troops led by Lt. Colonel Rohitha Aluvihare under the 53 Division commanded by Major General Kamal Goonarathne, have found the bullet ridden body of the terrorist leader lying on the bank of the Nanthikadal lagoon.
Ironically, Interpol wanted terrorist K. Padmanathan alias KP this morning told pro LTTE media that the LTTE leader was safe and sound. With the news appeared on media, thousands of Tamil civilians living in Colombo capital joined celebrations of the security forces' victory saying that the curse placed on the Tamil nation has finally removed