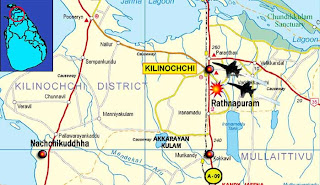 according to defence.lk."The target was located 1.5km East of the A-9 trunk road and North of the Iranamadu Tank", Air Force Spokesperson Wing Commander Janaka Nanayakkara said.

According to the Air Force Spokesperson, the target was acquired on real-time ground information received.

The site is known to be the main female black tiger training and coordinating facility and a most frequented location by LTTE's intelligence wing chief, Pottu Amman, military sources said.

But according to tamilnet.com a civilian was killed and at least two, including a child, were wounded in 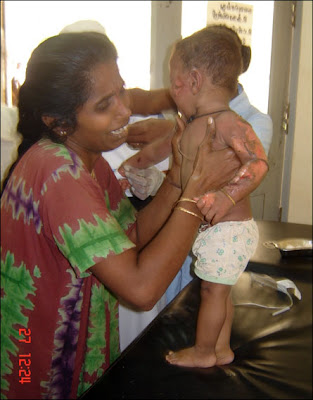 Sri Lanka Air Force (SLAF) attack in Iraththinapuram, a suburb of Ki'linochchi town, Saturday around 12:30 p.m.
tamilnet has repoted The ICRC office, which was recently relocated 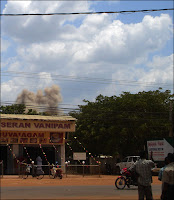 from Ira'naimadu junction, is situated around 150 meters away from the bombed locality. Meanwhile, Sri Lankan defence ministry claimed that the attack was a 'precision air strike' against an LTTE target. 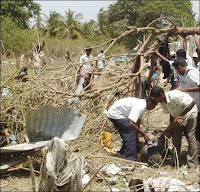 A young boy has been killed and 15 people injured after an explosion ripped through a flower market in India's capital New Delhi.

The market, in the Mehrauli area, was packed with shoppers when, according to eyewitnesses, two men drove up in a motorcycle and dropped a package.

Police have described it as a low intensity explosive device.

Witnesses said blood and broken glass littered the streets, and one man said his brother had taken five people to hospital.

Some of the injured were in serious condition while six others had been admitted to hospital in critical condition, the Press Trust of India said.

Two weeks ago, five bombs ripped through busy shopping areas in Delhi, killing at least 20 people. Nearly 50 were killed in Ahmadabad in July.

Police say they have arrested the head of a group claiming the attacks.

Mohammed Arif Sheikh, described as the founder of the Indian Mujahideen (IM), was arrested along with four others, Mumbai (Bombay) police said on Thursday.