Give me back my child 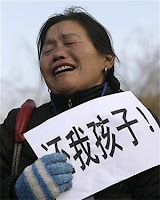 Give me back my child

A woman, whose child died from drinking tainted milk, holds a sign reading 'Give me back my child' outside Shijiazhuang Intermediate People's Court, Hebei province. REUTERS


According to defence.lk web 'LTTE terrorists have blasted off the Kalmadukulam Tank bund Jan 24th morning in a desperate attempt to stall the multi-frontal military surge towards Visuamad 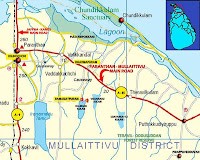 u area, latest reports from the Mullaittivu battlefront said. "This is totally an inhuman act with least respect to the lives of innocent Tamil civilians entrapped in the area", a defence official said while urging worldwide condemnation for the terrorist act.

Terrorists have used high explosives and triggered the detonation flooding a section of the A-35 Pranthan - Pooneryn main road, Ramanatpuram, Dharmapuram and Visuamadu. LTTE terrorists had resorted to this cheap tactic after suffering heavy beating by the security forces during intense fighting that erupted since Friday (23), Northeast of Kalmadu and Nethiliaru, security sources said. Terrorist resistances were beaten comprehensively in the ground battles, which left its fighting formations in total disarray, security sources said.
Posted by SRI LANKA TODAY at Saturday, January 24, 2009

Sri Lanka: Media must be allowed to work freely and safely -Amnesty International

Sri Lanka: Media must be allowed to work freely and safely -Amnesty International

Sri Lankan authorities must ensure that the country's media are allowed to work without restriction and in safety, Amnesty International said today.

"The Sri Lankan authorities are doing little to ensure the saf

ety of the country’s media, or to prosecute those responsible for murdering or attacking them. They are also directly responsible for subjecting journalists to harassment and interrogation, " said Yolanda Foster, Amnesty International' s Sri Lanka Researcher.

Sandaruwan Senadheera, editor of 'Lanka-e-news' (www.lankaenews.com)was questioned for six hours today by officers from the special wing of the Criminal Investigation Department (CID) at their headquarters in Colombo Fort about a complaint lodged by the Defense Secretary Gotabhaya Rajapakse.

The complaint concerned an article posted on the website on 21 February 2008 headlined 'International intelligence service suspends providing information to ; Gota is responsible for the losses since December 31.' Mr Senadheera was told that office

rs would visit his office next 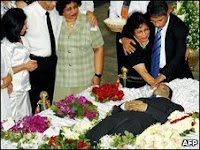 week for further questioning.
Picture-Lasantha Wicramatunge and his body
This comes a day after an assault on Upali Tennakoon, chief editor of the Rivira weekly newspaper, and his wife Dhammika, and follows the fatal shooting earlier this month of Lasantha Wickramatunga, editor of the Sunday Leader newspaper.

At least 14 media workers have been unlawfully killed in since the beginning of 2006. Others have been arbitrarily detained, tortured and allegedly disappeared while in the custody of security forces. More than 20 journalists have left the country in response to death threats.

"Without a free media that is able to express alternative views and offer the opportunity for public scrutiny, abuses can flourish under a veil of secrecy and denial. 's climate of impunity for attacks on the media has made it impossible to get an accurate impartial picture of what is happening in the country. By threatening journalists with the risk of arrest, and failing to protect them from attack, the government is failing its citizens," said Yolanda Foster.