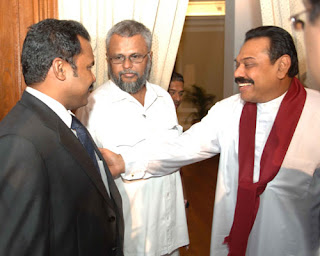 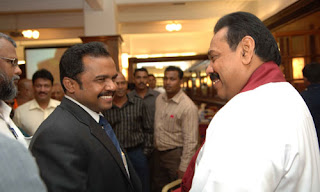 Conference(APC) was due to meet at Presidential Secretariat, Colombo 10.30 am today (Oct. 11th) under the auspices of President Mahinda Rajapaksa.
Every party already having represen 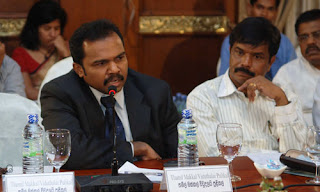 tation at the APC as well as the TMVP have been invited to attend.


President Mahinda Rajapaksa told the All Party Conference today, the LTTE must surrender and enter the democratic process. 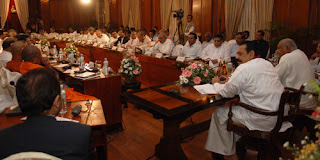 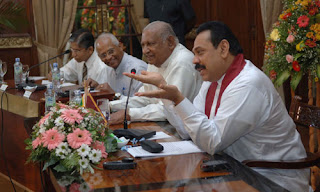 the session.
he Conference will review progress made so far by itself as well as All Party Representative Committee, and discuss the future c 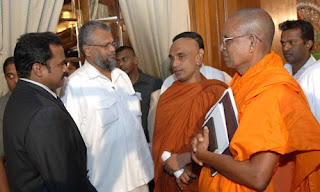 ourse of action, the official said.

However, the UNP said it would not participate in today's meeting, as it was busy preparing for the funerals of slain retired Maj. Gen. Janaka Perera and his wife Vajira in Colombo this afternoon.

Also, the JVP said it would boycott the conference as its deliberations have been a fruitless exercise.
Posted by SRI LANKA TODAY at Saturday, October 11, 2008 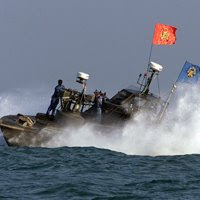 See tigers deputy ,Death of ‘Chelian’ yet to be confirmed
Defence sources claimed this morning (Oct 11th) the second in command of the LTTE Sea Tigers, known as “Chelian” has died with two others, from a claymore attack in an uncleared area.
Later reports claimed three persons have died in the outskirts of Mullaitivu from a claymore blast past 6.30 in the morning, but no independent identification of the three dead persons has been made, says the same source.

Independent sourcing of information from the battlefront is not possible as no media person is allowed independent travel in war affected areas and beyond.
Posted by SRI LANKA TODAY at Saturday, October 11, 2008

Commander of the Army Lieutenant General Sarath Fonseka in his message on Army Day (October 10) and its 59th Anniversary paid a glittering tribute to all heroic soldiers who defend their beloved Motherland at the expense of their own lives. 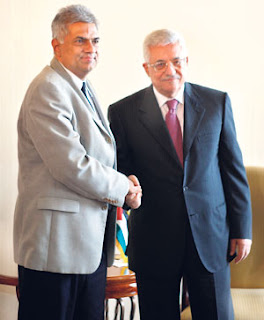 Opposition sources said Minister Athauda Seneviratne who was the Minister-in-attendance for the visiting dignitary had walked in unannounced while the talks were proceeding and his presence took the visiting delegation too by surprise.They said it was not the usual practice for Ministers-in-attendance to be present with visiting heads of state or governments.

The cordial discussion between Mr. Wickremesinghe and Mr. Abbas was based on the situation in the Palestinian territories and the developments in Sri Lanka. They met at the Colombo Hilton. 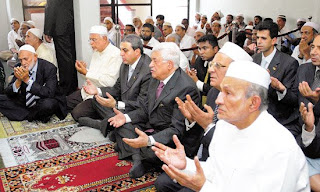 Foreign Minister Rohitha Bogollagama assured to work with the State of Palestine on a common ground to fight and defeat terrorism and restore democracy in both nations.

“During the discussion, we stressed the need for defeating terrorism to restore democracy,” he said.

Sri Lanka will be model for countering terrorism. “Terrorism is a global challenge and Sri Lanka is facing this grave challenge with a higher level of capacity.

The East was liberated from terrorism and democracy was restored in the region.

The Government is launching a humanitarian mission in the North to liberate the region and civilians engulfed by terrorism. Once the North is liberated, Northerners will enjoying democracy and freedom,” Minister Bogollagama remarked.

The Minister asserted that Sri Lanka and Palestine had inked bilateral agreements on Technical Cooperation and Practical training and several other sectors such as human resources, science, culture, education, tourism and health care

The Sri Lankan Government is willing to extend support and assistance to the Palestinian people in the broad spheres of development.

“President Mahinda Rajapaksa is a strong advocate of the Palestinian cause and the Sri Lanka- Palestine Solidarity Society will keep the relationship warm and unique.”
Palestinian Foreign Minister Riad Malki observed that both Sri Lanka and Palestine were facing terrorism.“Palestine is sharing three pillars with Sri Lanka and they are fighting terrorism, promoting democracy and economic development.

“On this basis the bilateral agreements will strengthen the relationship between the two nations”, he added. Minister Malki noted that the Palestine Government is glad for the support and cooperation extended by the Sri Lankan Government in the development process in Palestine.